Take bluesman Larry Taylor with several of his long simmering life stories, add a few of his closest buddies from the West and SouthSide. Put them in Joyride Studio with skilled recording engineer Brian Leach. Presto! Out comes a four-song EP of original tunes, "New Chicago Sounds of Larry Taylor."

The mini-CD is Larry’s first original work since They Were in This House was released in 2004. “I wanted to pep things up for young people to get into blues,” he says.  Every tune has a rhythmic snap, from the funky, James Brown-like “Jump Down American Queen” tribute to African American women, to the Wolf  howl that opens the song “She Treats Me Just the Same.” The themes are still the blues that everybody now realizes don’t go away— from messed-up relationships to “Penitentiary Blues” and “I Paid My Dues.”

Photographer Bernard Dean Moten, who travels with many Chicago celebs, shot the album cover in his studio and at West Side locations—Garfield Park and the W. Madison Street business district.

The cast of musicians: 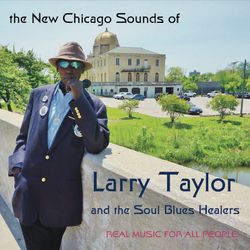 Hear and buy all the songs on CD Baby.

Larry and Bonni extend sincere thanks to their Fractured Atlas donors who helped make this punchy little CD possible. A larger album , "Generations of Blues," with songs by Larry's brothers and sisters has been recorded and is in the works.