Another Taylor brother, Tim, played drums with Eddie and Larry. Rounding out the band quite well were bass player Karl Meyer, guitarist Rockin’ Johnny Burgin and harp player Martin Lang.
Taylor sister Demetria sang in her own act at the Fest on Friday.  Another sister, Brenda, hosted a booth of Eddie Taylor souvenirs, including T shirts like those worn by the band.

“It was a long time coming,” noted Larry, who had not performed in the city’s Blues Fest since 2008.  “I’m thankful and enjoyed playing with my family. The fans were looking for something from me, and I had to bring it to ‘em.” 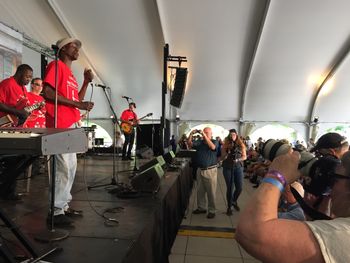